When I envisioned my family it looked very different from what I got.  My husband and I always talked about having four kids.  We always said we wanted two boys and two girls.  I didn’t get my little cookie-cutter family, but what I got was so much better.

In 2007, I was blessed with my beautiful daughter.  She was the most awesome baby and is now a pretty amazing tween.  She makes being a mom easy!  She is definitely my greatest accomplishment.  I could brag about her for days, and in another piece, I will, but this one isn’t about her.

We didn’t get our four kids for a multitude of reasons including finances, age, and infertility.  My first pregnancy was a beautiful surprise.  I was just engaged and wasn’t even thinking about being pregnant.  My second pregnancy didn’t happen as easily.  After a year of trying to conceive, followed by tests and blood draws; I started Clomid.  A year on Clomid, a cocktail of vitamins, and giving up caffeine, I finally conceived my youngest child.  We were elated. The frustration was finally over.  Our family was growing.

At nine weeks pregnant, I woke up with the most horrific pain I had ever felt in my life.  After going to one emergency and being transported by ambulance to another, the pain had gotten so severe that they placed me on a morphine drip.  My entire body ached to the touch and I couldn’t stop vomiting.  The doctors didn’t know what was wrong, but the baby was still all right.  I eventually consented to exploratory surgery.  I now was at risk of losing my baby.  During the procedure, they discovered that I was bleeding out, and my abdomen was filling with blood.  My ovary and fallopian tube were dead.  I had a Salpingo-Oophorectomy.  In layman’s terms, I had my ovary and tube removed.  I had an ovarian cyst rupture, causing my ovary to torsion killing it n my tube.  Since my placenta had not developed yet, the baby was feeding on an ovary.  We prayed that it wasn’t the one they removed.  I began taking hormone pills and seeing my doctor weekly.  In the meantime, my doctor prepared me for the possibility of miscarriage.  Each week we defeated the odds, and one day I was no longer considered high risk. Although I never stopped worrying, I finally allowed myself to hope.  In October, that hope turned into happiness when my beautiful baby was born. 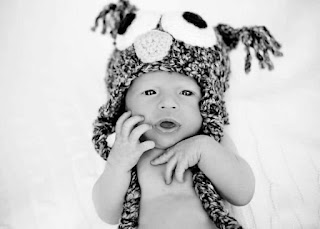 While the family I had imagined included boys, the reality was that I had wanted another daughter.  I cried when I found out I was having a boy.  I knew how to play with barbies and have tea parties.  I didn’t know how to play cars and Army men, nor did I have the desire to learn.  Everyone was telling me how lucky I was to be having a boy.  Despite every “boy mom” telling me how wonderful little boys were, I just wasn’t feeling it.  Some women were meant to be a mommy to boys, I just felt I wasn’t.

This did not mean I didn’t bond with him.  The moment I held my son in my arms, I was in love.  He was this tiny little miracle baby that I thought I would never meet.  I loved him with all of my heart, but I didn’t feel the special mother-son bond that everyone talked about.  He was a very sweet but needy baby.  He was always happy but could be quick-tempered.  He nursed more than I ever thought was possible.  He definitely made me second guess myself.  How could I possibly take care of these two beautiful kids?  Could I give my daughter the attention she deserves while meeting the needs of this little one?  I never convinced myself I could, but it all worked itself out.  However, I still hadn’t developed that special bond that everyone was bragging about.  There was a powerful bond, but it felt no different from the one I had with my daughter.  Why did I not have a special bond with my son?  I loved him so much that my heart could explode, but I felt the same way about my daughter.  I decided to quit worrying about this so-called special bond and enjoy every minute.

Before I knew it, he was sitting up and had developed a big personality.  His smile was contagious and could light up the room.  He was a funny little guy who loved to make people laugh, especially his sister.  I was even a little jealous of how much he loved her.  From day one, she was his favorite.  Even as a newborn in the hospital he tracked her voice, turning his head to whatever direction she was in.  Their bond was truly the sweetest.

He grew faster than I ever thought was possible, or maybe it felt that way because I knew he was my last baby.  He loved giving kisses and his smooches were the BEST!  One day when he was just learning to walk, he waddled over to me and placed a hand on each cheek and kissed me.  After that, I was a goner.  I then knew what everyone was talking about when they talked about the love between mom and sons.  He then just kept hugging and giving me kisses from there on out.  His nonstop desire to cuddle me, his need for me when he became overwhelmed had shown me that indeed there was a special connection. 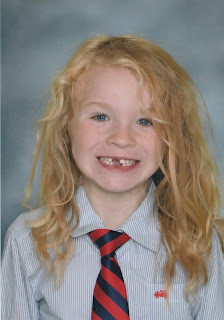 As he has gotten older, our bond has grown.  He absolutely prefers me for almost everything.  I will admit he prefers playing some games with daddy.  Remember how I said I had no desire to play cars and army men? Well, I still don’t!  That doesn’t mean I don’t play them, it just means I suck at it, and he knows it.  We have found plenty of things I am good at playing, or at least he pretends that I’m good at.  Maybe he is just taking pity on me.

Raising a boy has been a challenge, but so rewarding.  Although his heart is huge, my son is small in stature.  Like every mother, I am protective of my kids, but nothing brings out the mama bear in me more than protecting this little guy.  I am raising a guy who walks to the beat of his own drum.

He has long hair that he loves and has no desire to cut it.  He is very particular about it.  I’ll just say she prefers it curly.  He doesn’t care when people mistake him for a girl.  He is also very particular about what he wears.  His socks can’t be bumpy, and his pants shouldn’t touch his shoes.  It makes me crazy, but we have learned to adapt to his quirks. He is just living his best life and being true to himself. 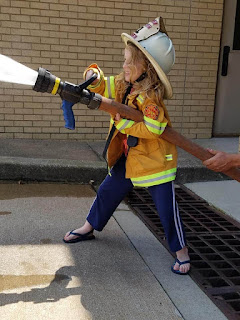 One thing about my wee man is he has very strong opinions.  He knows what his interests are.  When he likes something he can be obsessive about it.  He has a very one-track mind.  I have learned how to spend quality time with him while fostering his interests.  For the past six years he has been OBSESSED with all things fire department; books, shows, toys, clothes.  You name it; he loves it.  We eventually began visiting firehouses regularly.  First locally, and then when we traveled.  He now has an extensive collection of fire department patches from around the world. The firemen he meets are always impressed with how much he knows about the engines, tools, and gear.  Six years later, he still dreams of being a firefighter.  We have tried to expand his interests, but he always pushes back.  So I work hard to come up with new creative ways to cultivate his love for the fire department.

He isn’t interested in the things most boys are into.  He enjoys playing house with his sister.  He isn’t interested in superheroes or playing sports.  He enjoys watching the St. Louis Cardinals and Blues with me, but I think it is more because it’s something that I enjoy.  He is extremely sensitive to other people’s feelings and cries when anyone in our house cries.  Even when he is hurting, he tries to make those around him feel better.  My boy knows exactly when I need a hug or kiss.  Although he tells me he loves me a million times a day, it is always at the perfect time.  His love is the best medicine. 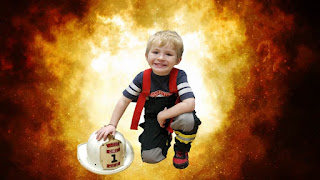 We have developed the most special and perfect relationship.  I’m not sure if it is that same mother-son relationship that everyone talked about.  I don’t think it is. Because this kid I am raising is so unique and special that there is no way he can fit into any stereotype.  Not even one about a mother/son relationship.  I am more than okay with that.  I wasted so much time looking for some bond that everyone else had, that I didn’t even see what we had was so much more special.