Many Names, One Purpose. 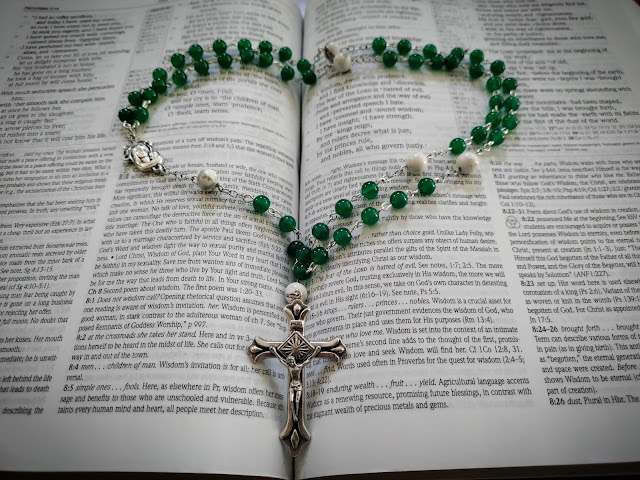 I was born and raised catholic, as were my siblings. We made all of our sacraments and attended Catholic School. Once we reached a certain age we were allowed to make our own decisions when it came to religion and our faith. I strayed away from the church as I didn't agree with all of the beliefs. One particular reason I chose not to attend church on a regular basis was because of my mother. My mother was all but divorced from my father. She met another man who raised me from before the I was born. They built a life together. However my mother was viewed as a sinner and felt like an outcast in a place that had once given her comfort. Although she did not attend mass regularly she continued her faith outside of the church. All of these years later my mother has still maintained her faith. Till this day she still prays her Rosary faithfully.

After meeting my husband and more importantly his mother I began attending church again. Not because I was pressured, but because I was ready to give it another try.  My husband came from a very religious family, and he was so far away from his home. A part of me had hoped that us attending church would make him feel closer to his family and Ireland. We would later marry in the Catholic Church, baptize our children Catholic and have them attend religion class so they can make all their sacraments. Even with all of this, I still felt disconnected from the Church.

Recently I started saying my Rosary again. In a time of darkness, it has given me comfort. It makes me feel at peace when I'm surrounded by chaos. I think I'm starting to understand why both my Mother and Mother-In-Law prayed it so faithfully.

This past weekend I said my Rosary. Afterwards, I held it in my hand and let it fall from one hand to the other. I didn't even realize I was doing it. It made me think about how important these beads were for Catholics. It made me wonder if other religions had something similar to our Rosary. I spent some time on Google and I was quickly engrossed in articles. I knew many Christian religions prayed the Rosary.  The rosaries may be the same, but the prayers said are different. I became fascinated with what I was learning. 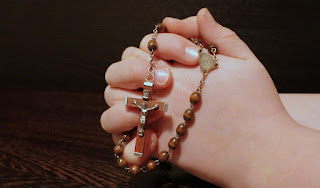 While many Christian religions pray the Rosary, non-Christians use prayer beads as well. Depending on the culture the number of beads vary and have special symbolism. The design of the prayer beads may differ by religion, but they all serve a common purpose. They all serve as a sacred tool for counting blessings, affirmations and repetitive prayer.

In Christianity, the term Rosary comes from Latin meaning "rose garden". Roses are the symbolic flower of the Virgin Mary. The traditional Christian Rosary consists of 59 beads connected to a crucifix. Three small and two larger beads connect to the pendant and are followed by five decades or segments of 10 beads each with a larger bead between each. Catholics pray The Our Father, Hail Mary and The Glory Be, however prayers recited vary by religion. Rosaries are often made of wood, crystals and semi-precious gemstones. They are often given as a gift for holy sacraments and the deceased are often buried with them. 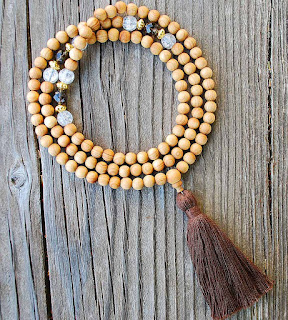 In Buddhism and Hinduism the practice of praying and meditating is done with Japa Malas. The term Japa is Sanskrit and means "the muttering of a mantra". The term mala means "circle". Japa Malas traditionally have 108 beads. This is a sacred number that symbolizes the wholeness of the universe. It is believed that if a string of Japa Mala beads break its' purpose has been filled. Mala beads are usually made from the seeds of Evergreen trees. If someone compliments a person's Japa Mala it is tradition to gift them the beads. This represents the practice of not being attached to things or their meanings. 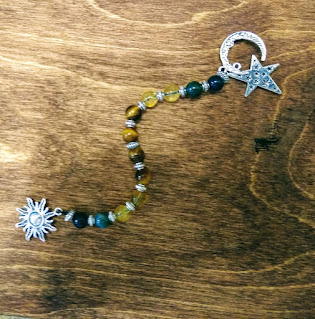 Some Pagans use prayer beads as a part of their ritualistic practice. The beads usually symbolize the four elements. They are made of natural materials associated with fire, water, earth and air. They contain marker beads for the eight sabbaths and the 13 Lunar cycles of the year are often included. A pendant such as a moon symbol or triquetra are often attached. Practitioners use the beads as a counting aid to facilitate visualization and meditation. 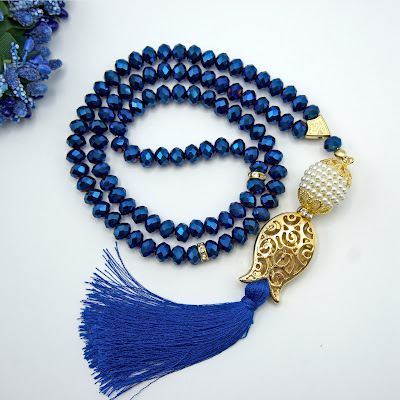 In Islamic culture prayer beads are called Misbaha or Subha. Misbaha is Arabic for "praise to God" and Subha translates to "glorify God (Allah). The most common ones have 99 beads divided in three sections of 33 with a tassel at the end. Each of the 99 beads represent each name of Allah. Users recite the 99 names of Allah, while others repeat the three versus of Allah's glorification and praise (Tasbih, Tahmid and Takbir) each 33 times. Many use the beads as a source of comfort when stressed or anxious. Just like other religions these beads are often made of wood, glass and gemstones. Subha are a common gift, especially to those returning from Hajj (pilgrimages).

The prayer beads of all these cultures are beautiful. During my research I was able to see some of these beads of different religions in person. They were all special to their owners, and they were all beautiful. We need to quit feeding into religious stereotypes and look at the person. We really are more alike than we think. As soon as we realize this the world will be a better place.